Was a day of ordinary normality that 2 August 1980 in the waiting room of Bologna Centrale station. It was hot. It was summer and perhaps the well-deserved holidays represented the only thoughts of those who, for work or leisure, frequented the station that morning.

What is certain is that no one could have imagined that that day would forever change the lives of all passers-by in Bologna, their relatives, friends and the whole of Italy. Because that was the day it was consumed one of the greatest horrors of the contemporary era. A massacre against humanity that has ripped a piece of heart from everyone’s chest.

The hot table in the west square

And it wasn’t just the people who came and went from the tracks, who boarded the train to a thousand adventures or left their extraordinary dreams on the carriages. There were also those who worked there at that station, to make the stay or the passage happier. There were the employees of the cafeteria in the west square, there was Marina Gamberini.

She is the only Cigar employee to be survived the Bologna massacre, the same that immortalized in a photo has become the symbol of horror. His face, disfigured by suffering, appears in that image which over time has transformed intosnapshot of the pain of the Bologna massacre.

More than 40 years have passed since that 2 August 1980, but that black page of our history has always remained there, still and unchanged forever in one shot.

It was 10.25 – as also remembered by that stopped clock, which became one of the symbols of the massacre – when, in the waiting room of the second class of the Bologna station, a timed bomb exploded. It was in a suitcase left somewhere in the room, the same in which 85 people lost their lives, and more than 200 were injured, on the body and in the soul.

With the Bologna massacre, our country registered one of the most heinous and serious terrorist attacks of the second postwar period. The culprits were identified almost immediately and the investigations led to a neo-fascist trail, but the judicial process – made up of numerous misdirections – was long, far too long.

In 1995, with the final sentence, Valerio Fioravanti and Francesca Mambro were condemned “as belonging to the armed gang that organized and carried out the attack in Bologna” and for having “been part of the group that certainly organized that act” (Wikipedia ). In 2007, however, the conviction of Luigi Ciavardini also arrived and in 2020 that of Gilberto Cavallini.

A massacre without principals

And while people died, outside and inside, due to the absence of the instigators of that massacre, Piazza Maggiore in Bologna became the seat of the demonstrations of citizens who criticized the exponents of the Government, the symbol of public indignation.

The only applause was addressed to him, to the then President of the Republic Sandro Pertini who arrived by helicopter in Bologna at 17:30 on the day of the massacre, in tears he stated in front of journalists: “I have no words, we are facing the most criminal enterprise that has taken place in Italy” (Wikipedia).

It took many years, perhaps too many, to get totally justice. The massacre of 2 August, in fact, she returned to the courtroom only in April 2021 with a trial against the alleged perpetrators of the attack. Because knowing who ordered and financed it is a right, for the lives that have been expended unexpectedly and for the whole country.

A small consolation, given the time that has elapsed, for the people who have experienced the massacre in the first person, for those who have lost their lives, who loved ones, and who himself.

Marina Gamberini and the symbolic image of the massacre

Among the people who had lost so much, or perhaps everything, too Marina Gamberini, the surviving Cigar girl, the one who appeared in the horror symbol photo. That shot tells all about that attention, the screams, the pain and the suffering.

An image that not only represents the epilogue of the attack, but also the beginning of a labor that would last for years. On the body, for the scars due to the explosion and on the soul for the pain of having lost her colleagues and for the guilt for being the only survivor.

“I remember exactly the moment that photo was taken. I had been under the rubble for over two hours and the rescuers had just pulled me out. In that scream and in those eyes there is everything: my desire to scream that I was still alive, but also the desperation, the terror and the disbelief for too great a horror “. Marina Gamberini confessed to the Resto del Carlino in an interview released after years of the massacre.

AND we remember that photo too, yesterday and today. There is Marina, transported away from the site of the attack on a stretcher after rescuers saved her body crushed by the beams, the same ones who he met and hugged years later. Because he owes his life to them. 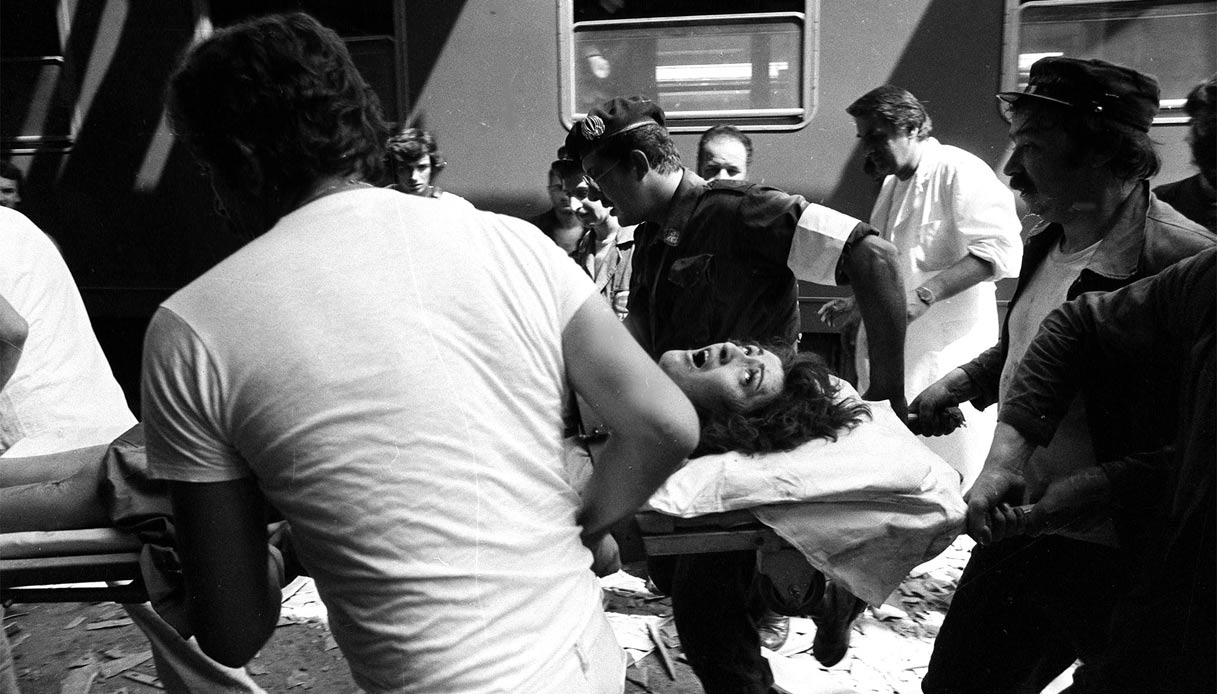 And if we have the right and the duty to look at that snapshot so as not to forget, it took Marina a long time to make peace with that image, because it represented everything she had lost. “I hated that image with all of myself, it took me years to get used to the fact that it circulated and even now, every time I see it, I feel like I’m going back to that day” (Il Resto del Carlino).

And on that day, as a survivor, Marina had lost everything. And she also had to fight with feelings of guilt, as she stated in several interviews, because the burden and the honor of having saved herself are hers, while Katia, Mirella Euridia, Nilla, Franca and Rita (her colleagues from Cigar) , they died.

Marina Gamberini was only twenty years old when that bomb destroyed the soul of the city of Bologna, the life of the people and the world of a young girl that he still had his whole life ahead of him. But it is for all the people who have not made it that Marina has chosen to live and not to survive.

But he has not forgotten and never will. She has become the voice of the 2 Agosto association, an organization that supports and fights for the families of the victims of the massacre that sees Paolo Bolognesi as president. And he fought on the front line for silences to stop being silences, to make the truth, all of it, come out.

Stop the Palermo-Frankfurt train with your hands,

there’s a boy at the window,

run and stop that train

The short week of work in Iceland is a success